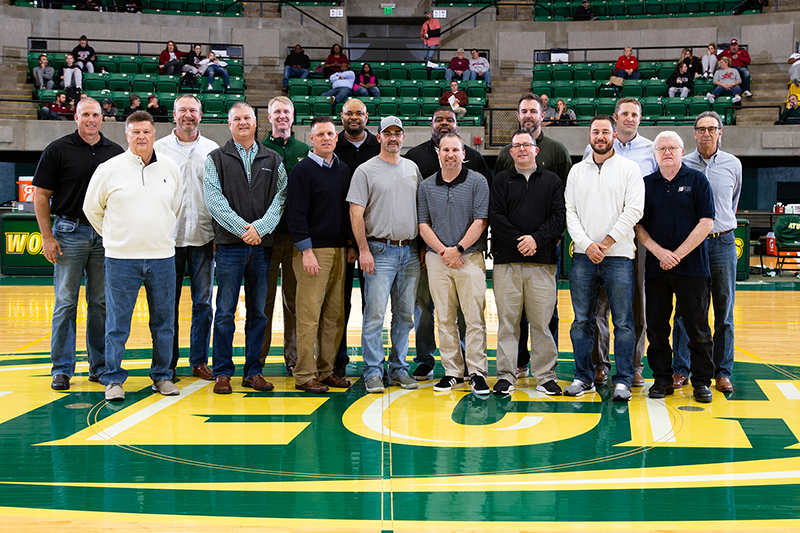 Adversity presents each of us with two options: relent and concede it was not meant to be, or fight on and find a way to finish the job.

A quarter-century ago, the men's basketball team at Arkansas Tech University chose to fight on. The reward was the Wonder Boys' greatest season in 40 years.

Marty Barnes, Arkansas Tech head men's basketball coach from 1987-99, and the players who made the Wonder Boys' run to the 1995 NAIA National Tournament semifinals gathered in January 2020 for a 25th anniversary reunion. Fifteen players from as far away as Illinois, Kentucky and Texas returned to Tucker Coliseum in Russellville to celebrate one of the must successful eras in Wonder Boys' history.

"Quite a few victories right there," said Barnes, looking to his right and seeing the collection of his former players who attended the reunion. "Great shooting teams, great defensive teams…rather long teams. We had 6-foot-8 on the wings. That was a great run."

The story began in 1987 when Don Sevier, director of athletics at Arkansas Tech, hired Barnes as the 17th head men's basketball coach for the Wonder Boys. Barnes had previously served as head boys' basketball coach at Russellville High School, where he led the Cyclones to a state championship in 1985.

That connection provided several players who helped build the foundation for Barnes' continued success at ATU. Russellville High School products Tim Hardin, Jeff Anderson, Gray Townsend, Jason Heiderscheidt and Todd Carter were among those who made the transition from red and black to green and gold during that time, as did Barnes' assistant coach, Dave Falconer.

Arkansas Tech and the University of the Ozarks have met in men's basketball 143 times. It is a series that dates all the way back to the first season of Arkansas Tech basketball in 1914-15.

Of those 143 meetings, two of the most memorable (or perhaps, from an Arkansas Tech perspective, forgettable) were the NAIA District 17 championship games in 1993 and 1994.

On both occasions, the Eagles traveled to Tucker Coliseum and returned to Clarksville with the trophy and an automatic berth in the NAIA National Tournament. U of O defeated the Wonder Boys 90-64 on March 10, 1993, and 78-71 on March 9, 1994.

With a large and gifted senior class returning for the 1994-95 season, the Arkansas Tech men's basketball program faced that critical question: relent, or fight on?

"What really hurt us was the '94 loss and the fact that we didn't get an at-large bid (to the NAIA National Tournament)," said Barnes. "Our team only had one conference loss that year, and we found out later that the person who was supposed to be voting for this district didn't even cast a vote the last two or three weeks. So when I went to the national tournament as a spectator, there were a lot of coaches coming up saying we should have been there. That was bitter because we were hot. The nucleus of that team returned the next year, minus (Greg) Chenault and (Rob) Lyall."

The Wonder Boys not only advanced to the 1995 NAIA National Tournament. They became the talk of the town with their play at the Mabee Center in Tulsa, Okla.

Early-round wins over Midwestern State University and Fresno Pacific University set up a national quarterfinal game against Montana State University-Northern Lights. Arkansas Tech “shot the Lights out,” as was referenced in a headline in The Courier newspaper in Russellville, connecting on 54 percent of its 3-point attempts to earn an 87-67 victory.

That win allowed the 1994-95 Wonder Boys to reach the NAIA National Tournament semifinals, matching Hindsman’s teams in 1953-54 and 1954-55 for the best national tournament finishes in school history. The Wonder Boys finished 29-6 overall during the 1994-95 season. They won the AIC and NAIA District 17 championships.

Arkansas Tech made it back to Tulsa in 1996 for its 12th and final NAIA National Tournament appearance in men's basketball before moving on to NCAA Division II membership.

"We had a grudge going, and that served as great motivation to finally get through the NAIA District 17," said Barnes, reflecting on the 1994-95 season. "Looking back on it now, the (AIC) was a tough league back then. Scottie Pippen (who played at the University of Central Arkansas and later starred on six world championship teams with the Chicago Bulls) never even made it to the national tournament out of our conference."

Weaver Serving on Board for Professional Organization

ATU Honor Students in Behavioral Sciences Give Back