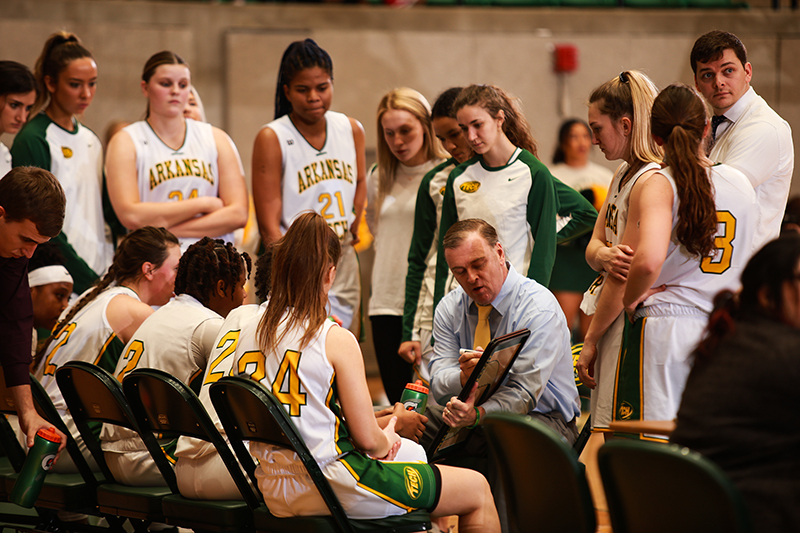 SWOSU’s Tyra Aska made a 27-foot 3-pointer from the right wing with 16 seconds remaining in the fourth quarter to tie the score at 74-74 and force overtime.

The Lady Bulldogs (21-7 overall, 16-6 GAC) scored the first four points of the extra period and never relinquished the lead as they improved to 50-2 at home since the beginning of the 2016-17 season.

The final straw came at the 1:11 mark of overtime when SWOSU’s Makyra Tramble gathered an offensive rebound and fed Bethany Franks for a jumper that gave the Lady Bulldogs a 90-84 edge. They made 4-of-4 free throws over the final 39.9 seconds to seal the victory.

“In a game like that, there are a lot of plays you can look back on,” said Dave Wilbers, ATU head coach. “A rebound here or a rebound there can make a big difference. I’m very proud of our team. We battled and gave ourselves a chance to win. Sometimes that’s all you can ask. Aska hit a huge shot.”

Franks finished with a career-high 29 points and 12 rebounds. It was her 20th career double-double. All 20 of Tramble’s points came after halftime.

Aska, a three-time All-GAC selection finished with 13 points, nine rebounds and eight assists in the final home game of her four-year career with the Lady Bulldogs.

Arkansas Tech (16-10, 13-9) led 41-26 at halftime, but ultimately could not overtime its deficit in turnover margin. SWOSU forced the Golden Suns into 28 turnovers while committing just four of its own. The Lady Bulldogs outscored ATU 29-0 in points off turnovers.

“I don’t know that it really matters,” said Wilbers when asked about GAC Tournament seedings. “Everybody in the league is good, and anybody can beat anybody on any given night. If we play like we did today, we’ll have a chance to win…plain and simple.”