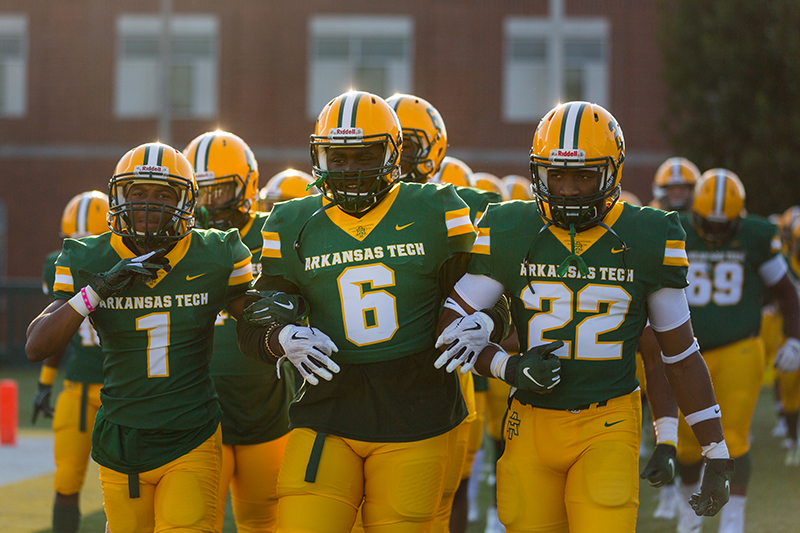 A pair of key fourth-quarter conversions by the Henderson State University offense kept the football away from Arkansas Tech University and allowed the Reddies to salt away a 27-21 Great American Conference win at Carpenter-Haygood Stadium in Arkadelphia on Saturday night.

Leading 24-21 with under eight minutes to play and facing a third-and-4 from its own 26-yard line, Henderson State kept the possession alive on a 16-yard pass from Richard Stammetti to Doug Johnson.

Stammetti did it again six plays later, connecting with Zac Newbell for seven yards on fourth-and-5 from the ATU 26-yard line.

It all led to a 22-yard field goal by Temo Martinez to increase HSU's edge to 27-21 at the 2:41 mark, but even more importantly, those two conversions allowed the Reddies to maintain possession for more than five minutes.

By the time the Wonder Boys got the football back, there were only two minutes and 41 seconds left in regulation. Henderson State's Antoine Roshell sacked ATU quarterback Manny Harris for a 16-yard loss on the second play of the subsequent possession, leading to a turnover on downs that allowed the Reddies to regain possession and run out the clock.

Stammetti completed 24-of-39 passes for 237 yards and a touchdown. Logan Moragne rushed 11 times for 118 yards for HSU, including a 72-yard touchdown run.

ATU's Harris was 10-of-19 passing for 132 yards. Wallace Foote rushed 10 times for 56 yards and a touchdown for the Wonder Boys, while Jesus Zizumbo connected on field goals of 43 and 41 yards. Caleb Batie added a rushing touchdown for Tech.

Kickoff is planned for 6 p.m at Thone Stadium at Buerkle Field in Russellville. Party at the Plaza tailgating will begin outside the stadium on the Crabaugh Hall lawn at 3 p.m.

Tech Tidbits: The Changing of the Seasons

Tech Tidbits: Pushing Through to the Finish Line