“My Tech degree is the reason my first boss at Arkansas Children’s Hospital decided to call me for an interview,” said Krohn. “I wanted to be a part of that as a faculty member.”That desire to pass along the determination she developed as an Arkansas Tech student led her to join the nursing faculty at ATU-Ozark Campus in 2012. Today, she is an instructor in the registered nursing program. 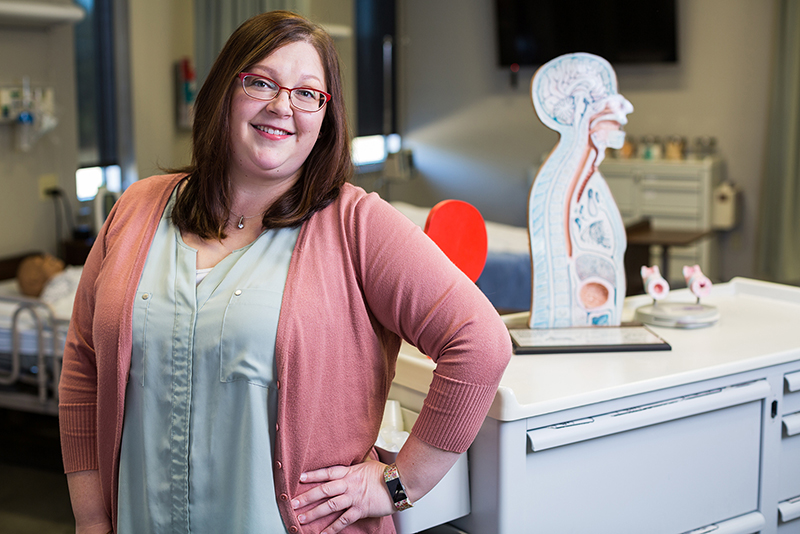 “I pretty much grew up on campus, and most of my family either has a degree from Tech or is currently enrolled,” said Krohn while reflecting on her formative years. “I think I actually bleed green and gold.”

She completed her Bachelor of Science in Nursing degree from Arkansas Tech in 2007.

“There were many things the faculty asked of me that, at the time, I did not appreciate,” said Krohn. “However, as I began my career, I realized that I had been fortunate to have experiences in school that many students from other universities had not experienced. I was ahead of the game in a few areas, and that was a great advantage.”

The grit she developed while a student at ATU benefited Krohn as she continued to pursue further higher education through the University of Missouri. She attained a Master of Science in Nursing degree in 2013 and a Doctor of Nursing Practice degree with an emphasis in nursing leadership and healthcare innovation in 2017.

“I am dedicated to making a difference in the lives of our students by providing them the tools and the education they need to attain gainful employment, to provide quality nursing care and increase the state of health in Arkansas, as well as advocate for the nursing profession.”

“I am a divorced momma, and I think this is the first year since my child was born that I haven’t been in school,” said Krohn. “I have spent many nights up writing papers while my kiddo slept on the couch next to me, but we made it through. I just had to keep going.”
Krohn shares her passion for helping others by continuing to work at Arkansas Children’s Hospital a few days per month and through her involvement with the Court Appointed Special Advocate (CASA) program that trains volunteers to assist children in foster care.