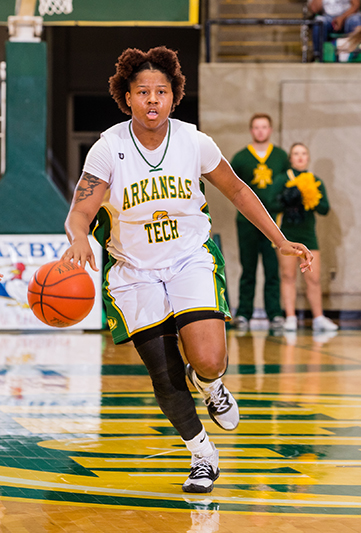 It was the first win at Tucker Coliseum for SAU's women since Jan. 6, 2005. Arkansas Tech's six-game winning streak ended and the Golden Suns (14-6 overall, 11-5 Great American Conference) lost their share of the GAC lead with six games remaining in the regular season.

Arkansas Tech led 67-50 after three quarters, but the Muleriders' depth made the difference down the stretch.

"It was especially evident in rebounding," said Dave Wilbers, ATU head coach, when asked about the depth disadvantage created by five of his players being out due to injury. "They were able to strip the ball away from us at times. Credit (SAU). They hit a big shot at the end. This was a tough game."

The Golden Suns committed 30 turnovers and Southern Arkansas finished with a 32-21 edge in points off turnovers.

Lycia Peevy notched a career-high 26 points and grabbed 13 rebounds for the Golden Suns. She was 10-of-15 from the field.

Southern Arkansas closed the second quarter with a spurt of its own. The Muleriders outscored Arkansas Tech 8-2 during the final 1:57 of the half to cut the Golden Suns' lead to 49-41 at halftime.

Arkansas Tech switched from man-to-man to zone defense in the third period and forced the Muleriders to miss 12 of their final 13 field goal attempts in the period.

The Golden Suns took advantage with a 10-1 run that gave them a 67-50 lead going to the fourth quarter.

That was when SAU's depth took over. The Muleriders out-rebounded ATU 9-2 during the final 10 minutes of regulation and forced overtime behind a Young basket with 1:03 remaining.

It looked like Arkansas Tech might escape when Stackhouse put it in front 95-94 by making a 3-pointer with 15.6 seconds remaining, but Guinn had the final word.

ATU's inbound pass after Guinn's game-winning shot was intercepted by Makayla Gatewood and the Muleriders celebrated the end of a 10-game losing streak against Arkansas Tech.

The Golden Suns will visit Rhodes-Reaves Field House in Searcy for a 5:30 p.m. GAC contest against Harding University on Thursday, Feb. 13.