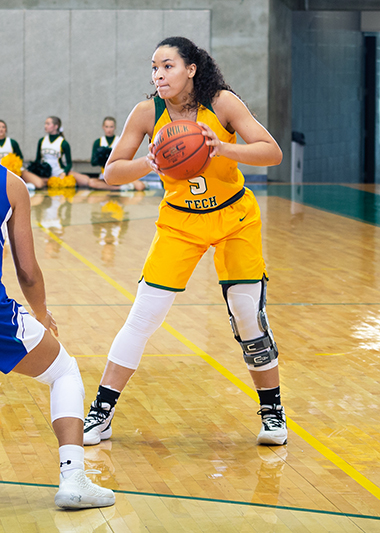 A cold snap from the field during the second quarter put Arkansas Tech University in too deep of a hole to escape Thursday night at Rhodes-Reaves Field House in Searcy.

Arkansas Tech (14-7 overall, 11-6 GAC) was undone by 11 consecutive misses from the field over a span of more than eight minutes during the second period.

“We were getting really good shots,” said Dave Wilbers, ATU head coach. “I told the team at halftime I had no complaints about our shot selection. We just weren’t making them, and (Harding) was really hot on the other end. Some nights the other team is going to hit shots, especially when they are at home. This is not all negative for us. Harding played really well.”

The Lady Bisons (16-7, 13-4) took advantage with a 20-2 run. Harding built a 49-31 halftime advantage. The margin remained 11 points or greater the rest of the way as the Lady Bisons won their ninth consecutive game.

Cheyenne Brown paced Harding with 24 points. Jordan Elder was 7-of-10 from 3-point range and had a career-high 23 points for the Lady Bisons, while Carissa Caples added 22 points, five rebounds and four assists.

The Golden Suns will visit the University of Arkansas-Monticello for a 2 p.m. GAC contest at Steelman Fieldhouse on Saturday, Feb. 15.