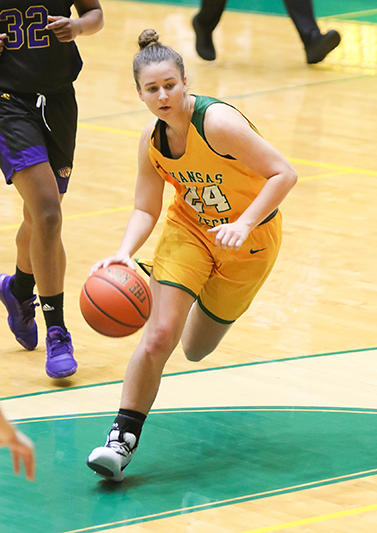 Henderson State University rode one of the best 3-point shooting performances in the history of its women’s basketball program to an 89-71 victory over Arkansas Tech University at the Duke Wells Center in Arkadelphia on Saturday afternoon.

The Reddies connected on 17-of-31 3-point attempts (55 percent) and finished one make short of matching their school record for 3-pointers in a game.

“There’s no way to overcome that,” said Dave Wilbers, ATU head coach. “Credit (Henderson State). They made shots, but our defense gave them too many wide open looks. Our perimeter defense was not good, and you can’t do that against a good shooting team like this.”

HSU’s Hailey Estes was 8-of-12 from beyond the arc and matched her career high with 26 points. Blu Jones added 24 points for the Reddies (4-1 overall, 2-0 Great American Conference), while her twin sister Pink Jones dished out 14 assists.

Henderson State scored the final five points of the opening period to claim a 26-21 lead after one quarter.

Two Lani Snowden 3-pointers sandwiched around a steal and layup by Blu Jones gave the Reddies an 8-0 run late in the second quarter and a 52-38 edge at halftime.

Ke’Vonshaye Stackhouse made a 3-pointer to pull Arkansas Tech within 74-63 after three quarters, but any thoughts of a Golden Suns’ comeback were erased by 3-of-22 shooting from the floor by Arkansas Tech (3-2, 1-1) during the final period.

The Golden Suns will take a break from GAC play on Wednesday, Nov. 27, when they face Lane College for a 2 p.m. non-conference contest in Jackson, Tenn.