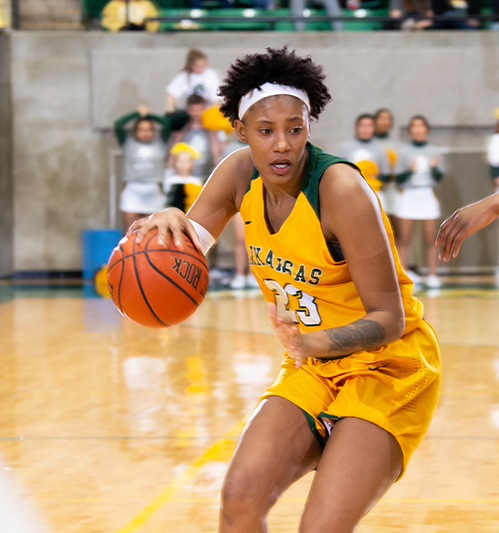 The Golden Suns took down the two-time defending Great American Conference champions 101-90 at Tucker Coliseum in Russellville on Thursday night.

It was Arkansas Tech’s first win over the Lady Bulldogs since the 2017 GAC Tournament championship game and their first home victory against SWOSU since Jan. 28, 2016. The Lady Bulldogs had won three straight games at Tucker Coliseum.

“It was a shootout,” said Dave Wilbers, ATU head coach. “We told the players that a lot of different players would have to bring the ball up and face pressure because (SWOSU) traps all over the place, but we got good shots and did a good job staying in front of them defensively. We made them hit tough shots.”

There were eight ties and six lead changes in the first half. Neither side led by more than six points during the opening 20 minutes. The Golden Suns scored the final five points of the half to take a 48-44 advantage to the intermission.

Arkansas Tech (10-5 overall, 7-4 GAC) carried that momentum over to the third quarter. The Golden Suns, who committed 11 turnovers in the first half, gave the basketball away just once over the first eight minutes of the second half.

Meanwhile, Arkansas Tech was 12-of-17 (71 percent) from the field during the third quarter and forced the Lady Bulldogs to miss 11 of their first 12 field goal attempts to begin the period.

As result, the Golden Suns built a 17-point lead during the third quarter, led 76-66 going to the fourth quarter and held off SWOSU by forcing it to miss nine of its final 10 field goal attempts.

Tech’s Ke’Vonshaye Stackhouse had 22 points and seven assists. Ryann Goodsell notched a career-high 18 points for the Suns, while Sarah Heard came off the bench with 14 points and Jayana Sanders poured in 12 points.

The Golden Suns will conclude a four-game homestand by hosting Northwestern Oklahoma State University in GAC action on Saturday, Jan. 25. Tip-off is planned for 1 p.m.