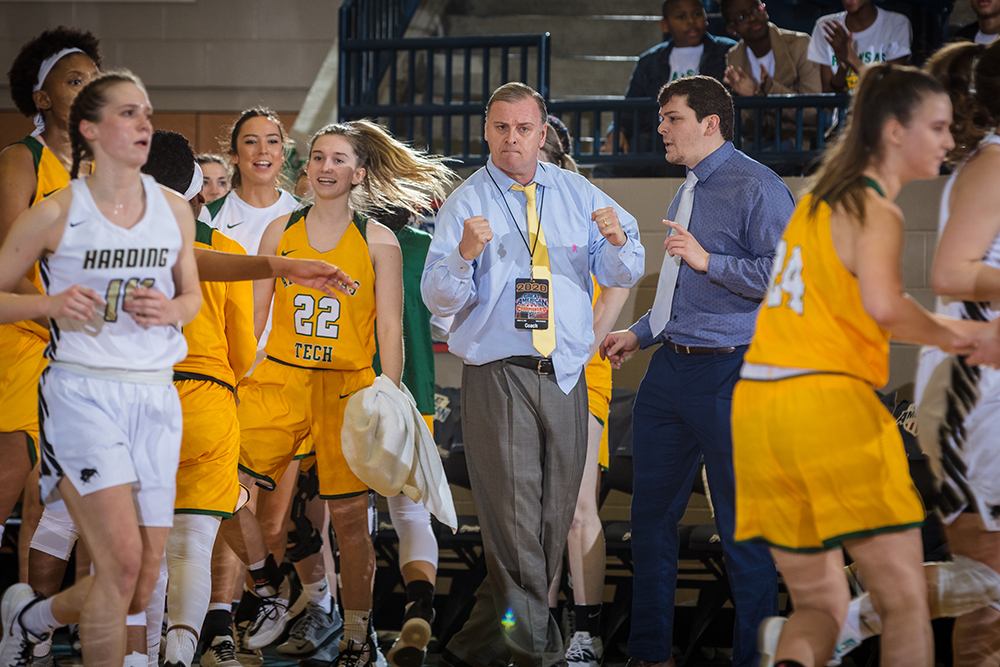 Arkansas Tech University’s Bartlesville magic will continue for at least one more game.

The Golden Suns defeated Harding University 74-72 in the first round of the Great American Conference Tournament at Bruin Fieldhouse in Bartlesville, Okla., on Thursday afternoon.

As result, Arkansas Tech advances to face either Southwestern Oklahoma State University or the University of Arkansas-Monticello in the GAC Tournament semifinals at 8 p.m. Saturday, March 7.

Among the keys to the Golden Suns’ opening-round victory was a 52-38 rebounding edge. It marked just the second time in Harding’s last 13 games that the Lady Bisons were out-rebounded.

“A lot of it was guts and effort,” said Dave Wilbers, ATU head coach. “We were really going after rebounds. We did a good job challenging shots, forcing them to take tough shots and then getting the rebound. It was a gallant effort by our team.”

The Lady Bisons (19-10) scored the first 10 points of the game and led by as many as 12 points in the opening quarter.

The Golden Suns steadily chipped away and pulled within 41-39 at halftime when Kaley Shipman beat the buzzer by banking in a 3-pointer from mid-court.

Arkansas Tech took its first lead of the day at 44-42 on a Shipman 3-pointer with 7:38 left in the third quarter. There were 11 lead changes and nine ties over the final 20 minutes.

The Suns took the lead for good on Shipman’s 12-foot jumper with 1:41 left. Her eighth and final field goal of the day gave Arkansas Tech a 68-66 edge.

The ATU lead was still two points when Harding got the ball for the final possession with 8.5 seconds remaining. Amanda Kearney’s 3-pointer at the buzzer hit the backboard, rimmed out and fell harmlessly to the floor as the Golden Suns advanced to the semifinal round of the GAC Tournament for an eighth consecutive year.

Shipman finished with 23 points. It was the sixth game of 20 or more points this season for the freshman from Mountain View.

Ryann Goodsell, one of two seniors on the ATU roster, had 12 points and 10 rebounds. Her defense was integral in limiting Harding’s Cheyenne Brown to 4-of-17 shooting from the floor. Brown had averaged 21 points in four previous career games against the Golden Suns.

“Ryann played the best game of her career,” said Wilbers. “We talked a lot about getting Brown off her spot, and Ryann did an outstanding job of that. She is the strongest player in the GAC.”

Thursday’s outcome marked the third consecutive ATU-HU game at the GAC Tournament that came down to the final shot.

The Golden Suns improved to 17-5 all-time in the GAC Tournament. A win on Saturday would give Arkansas Tech its sixth consecutive appearance in the championship game of the women’s GAC Tournament.