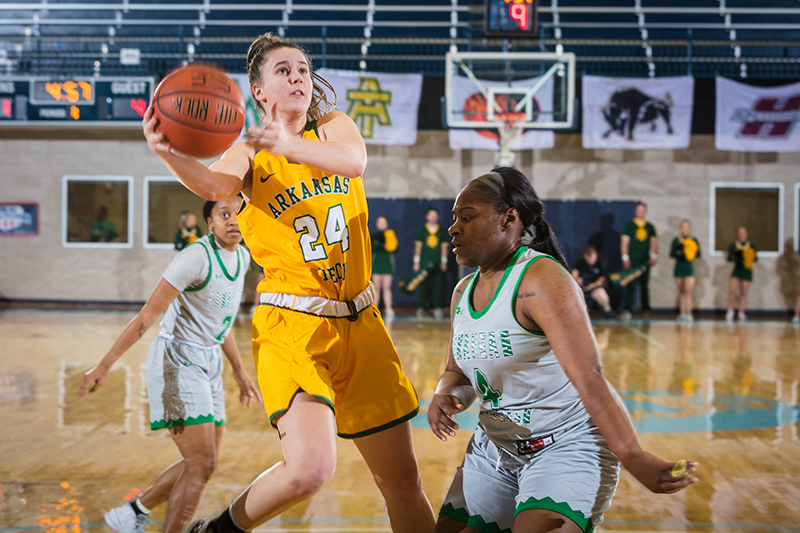 It was simply the University of Arkansas-Monticello’s night in every phase of the game from the very beginning.

The Cotton Blossoms rolled past Arkansas Tech University 72-57 in the semifinal round of the 2020 Great American Conference Tournament Saturday night at Bruin Fieldhouse in Bartlesville, Okla.

“UAM played very hard,” said Dave Wilbers, ATU head coach. “We had a difficult time getting into our offense, and it was because of their defense. (UAM) was a lot tougher than us. We didn’t match their toughness, and when you do that in the semifinal round of the conference tournament you’re going to get beat every time.”

Mackenzie Tillman set the tone by making a 3-pointer for the Cotton Blossoms on the game’s first possession. UAM made seven of its first 10 field goal attempts and built a 19-7 lead after one quarter.

Eight consecutive points to begin the second period gave the Cotton Blossoms a 27-7 lead with 8:21 left until halftime. UAM shot 18-of-29 (62 percent) from the field during the first half and led 49-17 at the intermission.

Arkansas Tech went on a 16-3 run late in the third quarter and early in the fourth period to pull within 61-44 with 6:40 remaining, but the mountain was just too tall to climb.

The Cotton Blossoms forced the Golden Suns to miss eight of their next nine field goal attempts, rattled off 10 unanswered points and went on to earn their first postseason win over Arkansas Tech since the 1995 NAIA District 17 championship game.

Berniezha Tidwell had 19 points and 11 rebounds for UAM. It was her sixth double-double of the season. Jaida Muhammad and Dezirae King notched 11 points apiece for the Cotton Blossoms.

Arkansas Tech’s Jayana Sanders had 19 points, six rebounds, five assists and four steals. She completed her junior season with 325 career assists, 10th-most in ATU history. She will enter her senior campaign needing 15 points to reach 1,000 for her career.

With the victory, UAM advanced to the GAC Tournament final for the first time.

The Cotton Blossoms (20-10) will play for the title and an automatic berth in the NCAA Division II Tournament when they face top-seeded Southeastern Oklahoma State University (21-7) at 3:30 p.m. Sunday, March 8.