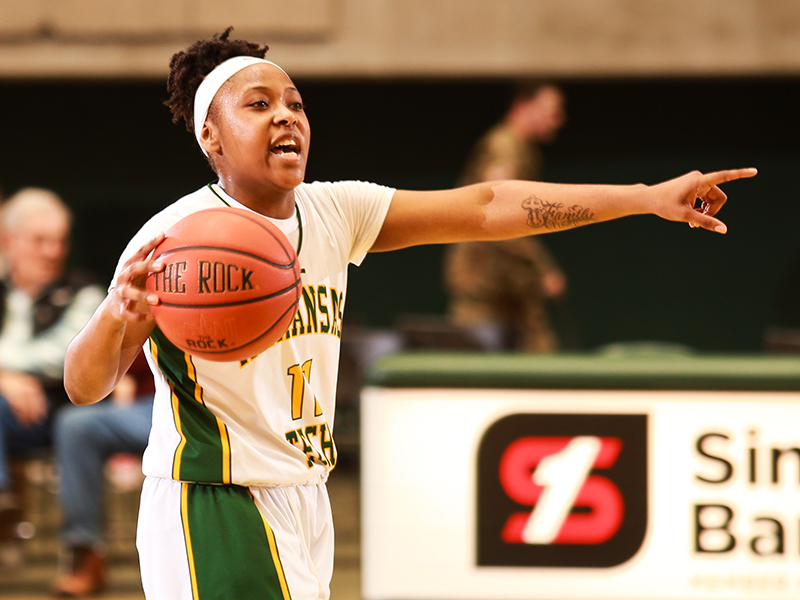 Too much Bailey Brown gave Arkansas Tech University a bad case of the blues Thursday night.

Brown scored a career-high 36 points and grabbed 19 rebounds to lead Northwestern Oklahoma State University to a 92-76 Great American Conference victory over the Golden Suns at Percefull Fieldhouse in Alva, Okla.

The 6-foot junior forward from Enid, Okla., was 12-of-16 from the field and 11-of-13 at the free throw line to help the Lady Rangers earn their second win in 20 all-time games against Arkansas Tech.

“Brown was the best player on the floor tonight,” said Dave Wilbers, ATU head coach. “We didn’t have anyone who could stop her. We tried several different defenses, but it came down to a 1-on-1 battle against her and she whipped all our post players. We got off to a slow start. Our guards were rushing early and we fouled too much. We were a step slow, out of position and when you do that you have a tendency to foul. Credit Northwestern. They outplayed us.”

Arkansas Tech (16-9 overall, 13-8 GAC) held a 14-12 edge after one quarter. A change in Northwestern Oklahoma State’s shooting fortunes during the second period propelled the Lady Rangers to the lead.

After connecting on 1-of-12 field goal attempts during the opening quarter, NWOSU was 11-of-17 (65 percent) from the field during the second 10 minutes.

That, along with 17 points and 11 rebounds in the first half from Brown, gave the Lady Rangers a 40-30 advantage at the intermission.

The Golden Suns will conclude the 2019-20 regular season with a GAC contest against Southwestern Oklahoma State University on Saturday, Feb. 29. Tip-off is set for 1 p.m. at the Pioneer Cellular Event Center in Weatherford, Okla.