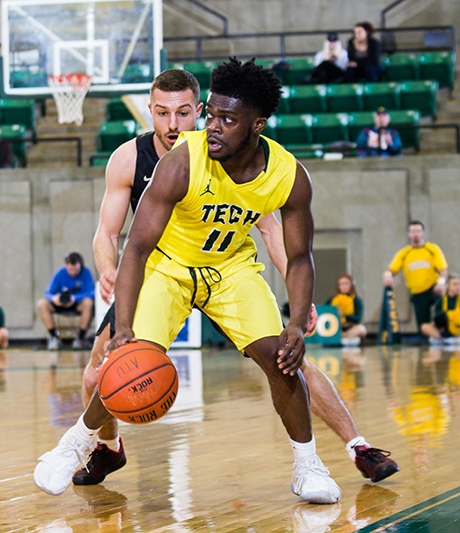 From the word go, it felt like it might be one of those special R.J. Glasper days at Tucker Coliseum in Russellville. It was.

"He was phenomenal," said Chad Kline, ATU head coach, when asked about the junior guard from Forrest City. "He can always score, but the good thing this week is he was able to score while being efficient. He also had seven assists and was a leader in the huddle. He has grown up these last couple of years. I'm proud of him."

Glasper was 11-of-23 from the field, including 4-of-8 from 3-point range. He connected on 9-of-9 free throw attempts, six of which came in the final 41.4 seconds and helped seal ATU's second consecutive win over a team that has been ranked in the National Association of Basketball Coaches NCAA Division II top 25 this season.

The Wonder Boys (8-4 overall, 4-2 GAC) topped Southeastern Oklahoma State University, which has been ranked as high as No. 14 in the nation this year, 74-70 at home on Thursday night.

"I'd like to petition the GAC to play all of our games at Tucker Coliseum," said Kline. "I feel much more comfortable when we are in this building."

That was when Dillon Gooding stepped up with a 3-pointer and Ke'Lyn Adams made a steal that led to an intentional foul against the Tigers.

Those two plays, along with an alley-oop from Glasper to Devante Foster in the final minute, tipped the momentum back in Arkansas Tech's favor for good. Glasper's free throws in the closing moments sealed the deal.

Tony Hall scored a career-high 17 points for the Wonder Boys. He was 5-of-9 from 3-point range. Gooding finished with 11 points and eight assists, while Adams had 10 points and eight rebounds.

Arkansas Tech notched a 28-14 edge in points off turnovers.

Camron Talley, the third-leading scorer in GAC history with 1,619 career points, had 25 points to lead the way for ECU (10-2, 4-2) on Saturday. The loss ended the Tigers' seven-game winning streak.

The Wonder Boys will visit Southern Nazarene University in further GAC play on Thursday, Jan. 9. Tip-off at the Sawyer Center in Bethany, Okla., is planned for 7:30 p.m.