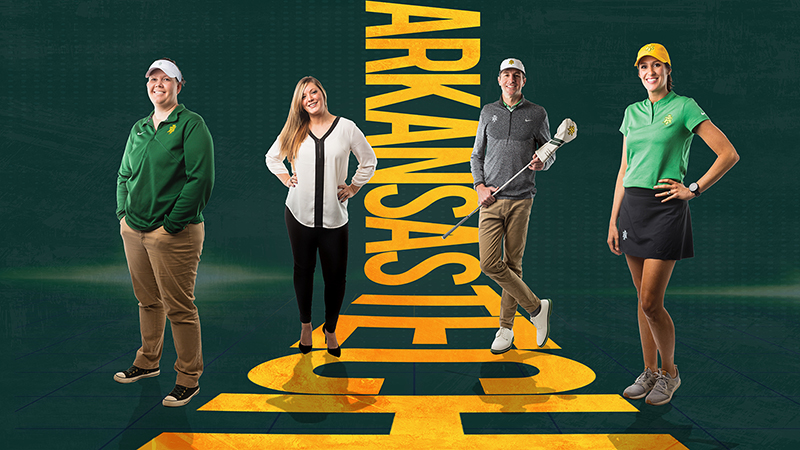 If the author Thomas Wolfe were alive today, he might be inspired to change the title of his novel “You Can’t Go Home Again.” Four Arkansas Tech coaches have defied that convention and returned to their alma mater to lead four of the most successful athletic programs on campus.

For alumni Kera Dukic, Luke Calcatera, Amy Anderson, and Abby Davis, the decision to come home was one that they all agreed was a great one.

“I can remember getting an email from coach Bayer,” said Dukic “I remember telling my mom I had no clue where Arkansas even was. I came here for a visit – I flew to Arkansas and drove home, and I fell in love with it. In typical Coach B fashion, I had a day or two to decide, and I ended up committing.”

When Dukic arrived in Russellville in 2007, her path to the court was not an easy one. Kayla Allison maintained her starting role through the 2008 season, but once Dukic reached her junior year, she moved into the starting rotation. Dukic excelled on the court, earning all-Gulf South Conference honors twice and earning all-region honors as a senior.

Dukic acknowledged that it was difficult waiting to establish herself on the court, but in spite of that, she knew she had made the best choice in coming to Arkansas Tech.

“I think I knew I made the right choice instantly,” said Dukic. “I wanted to play right away, but I fit in instantly with the team and its culture and the school, and once I found my niche on the court it all clicked after that.”

After Dukic finished her undergraduate degree, Bayer added her to the volleyball staff as a graduate assistant. For Dukic, the experience was a formative one.

“I don’t think I knew what I wanted to do yet,” said Dukic. “I knew coaching would always be a part of my life but I didn’t know whether I wanted to go into it at the collegiate level or the high school level, so for me it was important to see what happened behind the scenes. It seems like a glory job, but then when you’re behind the scenes as a graduate assistant you’re given so much more in terms of duties and responsibilities. It was awesome to get to know coach Bayer and the athletic staff in that way.”

It was a job – and a location – that Dukic enjoyed. However, when Bayer departed Arkansas Tech, Dukic wanted to pursue the opportunity to coach at her alma mater.

“How can I pass up the opportunity to at least apply,” Dukic said. “I didn’t know if I’d have a chance because I had just finished my first year as a head coach, but how could I pass it up?

In her first season at Arkansas Tech, the Golden Suns finished 17-12 with a 10-6 conference mark. Dukic looks forward to the opportunity to build upon the success of her first year in Russellville, and continues to take a lot of pride in a program that she says gave her so much.

“Being back here is so neat,” said Dukic. “It’s a feeling that you can’t explain because I have a lot of pride in the program in school. I’m competitive naturally, but I’ve invested in the program and Tech has invested in me, and I want it to be perfect.” 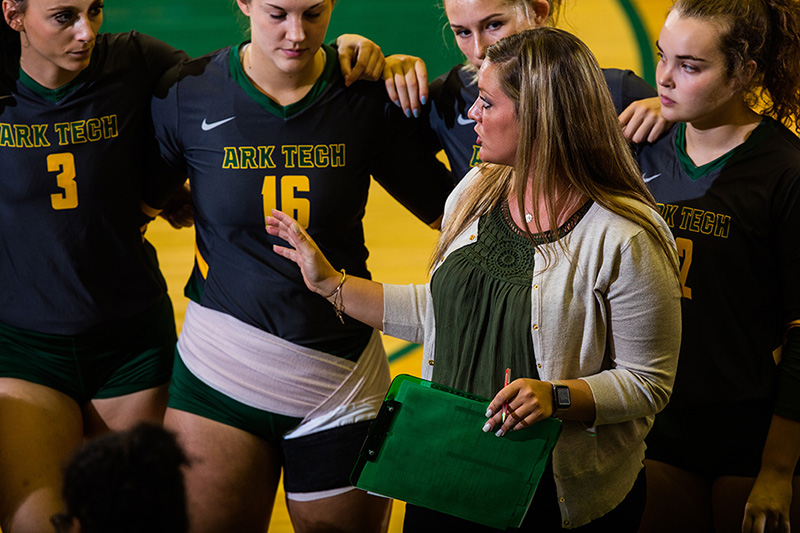 For Amy Anderson, the path to Arkansas Tech came through another one of the university’s most successful programs – the women’s basketball program, then coached by Joe Foley.

“Basketball brought me here,” said Anderson. “I had gone to Arkansas Tech camps for years and really loved it. I loved the tradition that the women’s basketball team had, and I had no other place in my mind that I wanted to go other than here.”

After two years of playing basketball, Anderson joined the newly-formed women’s golf team, playing for coach Roy McSpadden. After graduation, Anderson moved to Little Rock and began working in the healthcare industry, selling oxygen and home medical supplies. The pull of working in sports was too strong for her to ignore, and Anderson looked home for a place to make that dream come true.

“I called (then-Golden Suns head coach) Todd Schaefer and asked him if he needed a graduate assistant,” said Anderson. He said he did, and so I came back.”

One year later, Anderson moved from her role as a graduate assistant into a full-time assistant’s role with basketball and became the head coach of the Golden Suns golf program.

When Anderson left her basketball role behind, she threw herself into the golf program, and the Golden Suns have reached an unprecedented level of success in recent years. Under Anderson, Arkansas Tech has captured five conference titles – including four consecutive entering the 2018-19 campaign, and her Golden Suns squad is favored to win its fifth consecutive league crown this year. She has been named the Great American Conference Coach of the Year in four consecutive seasons (six times overall), has coached six GAC Women’s Golfer of the Year honorees, 36 all-conference, 10 all-region, and four all-region selections. She has led the Golden Suns to the Division II National Championships in four of the last five seasons.

The success of the golf program is extremely important to Anderson.

“It means everything,” said Anderson. “I was on the very first team we had at Tech, and just seeing the growth that has transitioned into what we have no w and what we hope to have in the future – it’s pretty exciting to look back on and see what has happened during the years I’ve been a part of the program.”

In addition to the many hats Anderson has worn as a coach, Anderson has also served in a variety of roles, first serving as the NCAA compliance officer and most recently as the Director of Student-Athlete success. Her unique experience as a Tech student-athlete and now as an administrator gives her a perspective that helps her in this position.

“I know what all the student-athletes are going through on the golf side,” said Anderson. “I know what it’s like trying to maintain that mentality when you’re out on the golf course. I also know what it’s like in a fast-paced sport like basketball where you can mess up on one play and get back on the other end of the court and do something good. I also know the pressure of having to wake up, go to weights, go to class, go to practice, go to community service, and I know how overwhelming that can seem to student-athletes. I think I can be a source for them.”

Luke Calcatera made his way to Russellville in 2003, to play under then-coach Dave Falconer. While some may have found the adjustment going from a suburban area to a more rural area difficult, Calcatera looked forward to the change in environment.

“Coming from the Dallas-Fort Worth area to Russellville was a positive experience,” said Calcatera. “I’ve always been kind of an “outdoorsy” person. There was a lot of eye appeal coming to a place like Russellville – the scenery really drew me in.”

It didn’t take long for Calcatera to gel with the team, and during his time as a student-athlete the Wonder Boys captured the 2004 Gulf South Conference championship and qualified for the Division II South Region tournament. He ranks third in program history for single-season scoring average and eighth in rounds played in a career. Looking back, Calcatera marvels at the success the program had both on the court and in recruiting – particularly given coach Falconer’s rejection of some forms of modern technology.

“We had some really good teams when I played. Coach Falconer was impressive – it was the early 2000s and he was able to get great players without even checking e-mail. He was able to put these great teams together.”

After graduation, Calcatera married and moved to Fort Collins, Colorado for 18 months before the head coaching position came open.

Calcatera returned to Russellville, and during his tenure as head coach, the program has reached new heights. Arkansas Tech has reached the Division II National Championships three times, earning national semi-finalist honors in 2017 and quarterfinalist honors in 2018. A four-time Great American Conference Coach of the Year, Calcatera also was named Central Region Coach of the Year in 2016-17. His most recent Wonder Boys squad finished the season with the lowest average in program history, finishing fifth or better in all 13 events. All of Calcatera’s teams have advanced to NCAA tournament play, and 15 times his teams have won individual tournaments.

Calcatera takes special pride in the success of the Wonder Bos golf program.

“In the past few years we’ve been able to do a few things that have been firsts for the program, and it definitely makes me proud,” said Calcatera. “There’s nowhere else like Tech where I could have that pride or history. It’s a place that I enjoy.” 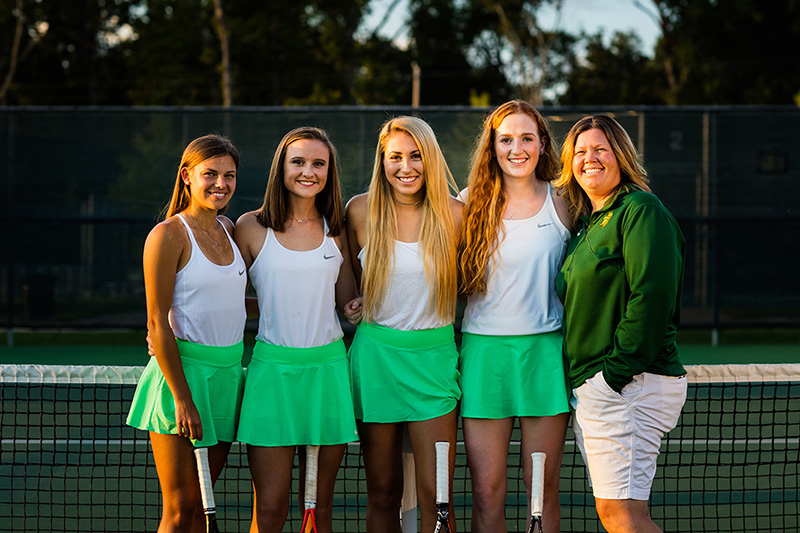 Abby Davis has been the face of Golden Suns tennis for 14 years, but growing up, the path to Russellville was an uncertain one. However, it is a path that Davis is glad she took.

“I actually thought I would not be at Arkansas Tech growing up in Paris, Ark.,” said Davis. “It seemed like everybody went to Tech. As an 18-year-old, I thought I’d go a little bit further down the interstate, but that didn’t work out. I came to Tech, and looking back on it, I wouldn’t change it.”

A four-year letterwinner in tennis, Davis earned all-Gulf South Conference honors while earning her bachelor’s degree in psychology. Unsure of her career path, she moved into the physical education department as a graduate assistant with the plan of going into sports psychology.

Davis then moved to Dallas with no clue of what she would do next. However, fortune favored Davis as former Golden Suns tennis coach Shery Forrest decided to move into an academic role and recommended Davis as her replacement.

Her tenure as head coach has been one of continuous growth and success. The winningest tennis coach in Arkansas Tech history with 169 victories, Davis’ squads have reached postseason play in 11 consecutive seasons, with three regular-season titles and one conference tournament crown, as well as a 2-2 mark in NCAA regional play.

One of the hallmarks of Davis’ tennis program has been strength off the court, as Tech has been named an ITA All-Academic team in four of the last five years, and 50 student-athletes have received conference academic honors. Additionally, the Golden Suns have represented the Central Region with the ITA Community Service Award for the past two years after totaling 635 hours of community service.

Davis’ initial reluctance to come to Tech became a full embrace, and over the years she has gained a greater understanding of what makes her alma mater a special place.

“I didn’t think I’d come here, but I’m a Tech person for life,” said Davis. “I think I have a lot more pride here than I would have somewhere else. Somewhere else, it’d be a job. Here, it’s just what you do. This is where all your people are, and you know, it’s not hard to come to work every day. I definitely think coming here, going to school here, and understanding where we’re from causes me to enjoy it more.”