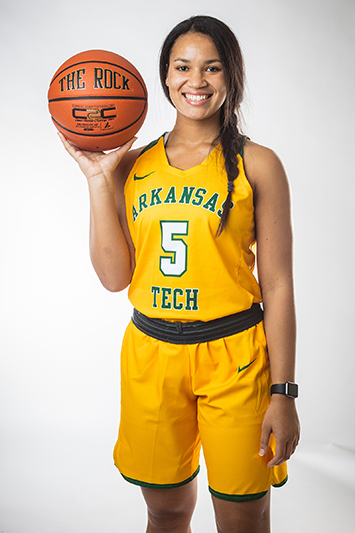 Ashley Breathitt only took one shot for Arkansas Tech University on Saturday. She made it count in a big way.

The junior from Fayetteville grabbed an offensive rebound off a missed free throw with 13.3 seconds left and made a left-handed layup to give the Golden Suns an 87-85 Great American Conference home victory over Henderson State University.

HSU had the final possession and took three shots at the basket, but none of them went in and ATU stopped a three-game losing streak against the Reddies.

With the win, Arkansas Tech (9-5 overall, 6-4 GAC) bounced back from a 75-71 overtime loss to Harding University less than 48 hours earlier.

“We really overcame a lot today,” said Dave Wilbers, ATU head coach. “Credit our players. They got back in the gym (on Friday) and got after it in practice. We had good focus and executed our game plan. We did a good job of forgetting about Thursday.”

Sarah Heard scored a career-high 24 points for the Golden Suns. The freshman from Cairns, Australia, made three 3-pointers over the final four minutes to hold off a comeback push by Henderson State.

“Sarah is one of our best shooters,” said Wilbers. “It was just a matter of time until she got some shots like that. We had a great environment today. The crowd and the band were great. I believe the band is worth four or five points.”