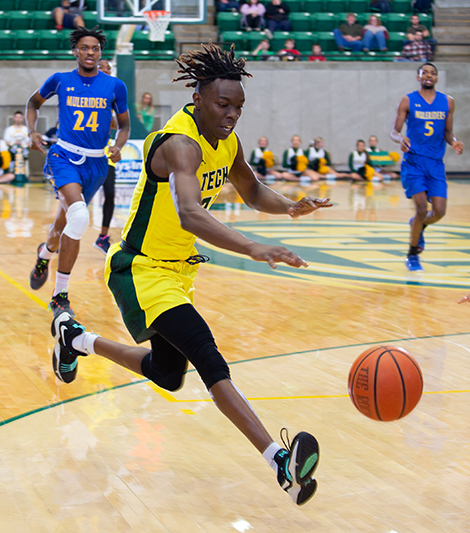 The Bison led by as many as 19 points in the first half, but the Wonder Boys rallied to claim a 63-61 lead when Ke’Lyn Adams made 2-of-2 free throws with 6.3 seconds remaining in regulation.

Dishon Lowery’s tip-in with 0.3 seconds left forced overtime. ATU’s R.J. Glasper made a layup with 10.3 seconds left in overtime to send the game to a second extra period.

Glasper gave Arkansas Tech a 78-75 edge in double overtime when he made a 3-pointer with 3:22 left.

Oklahoma Baptist (17-8 overall, 12-7 GAC) responded with its decisive 9-0 spurt, which was sparked by a Brantly Thompson bucket at the 3:06 mark and capped by a Rashad Lewis free throw with 15.7 seconds left.

The Wonder Boys (12-13, 8-11) went cold during that same time frame, missing eight of their final nine shots as they lost for the seventh time in their last eight contests.

“We took too many quick shots in the first half,” said Chad Kline, ATU head coach. “We have lots of guys who can score, but we keep telling them it’s not going to happen on the first ball screen. When you are struggling to score like we were in the first half, you have to get to the free throw line instead of relying on that 3-point line.”

Lewis scored a season-high 25 points and dished out five assists for the Bison.

The Wonder Boys will close out the home portion of their 2019-20 schedule when they host Southern Nazarene University for a 3 p.m. GAC contest at Tucker Coliseum on Saturday, Feb. 22.

ATU will honor Devante Foster, Kevin McNeal and Ramses Sandifer during a Senior Day ceremony recognizing their contributions to the Wonder Boys’ program.