A Different Type of Championship

A Different Type of Championship 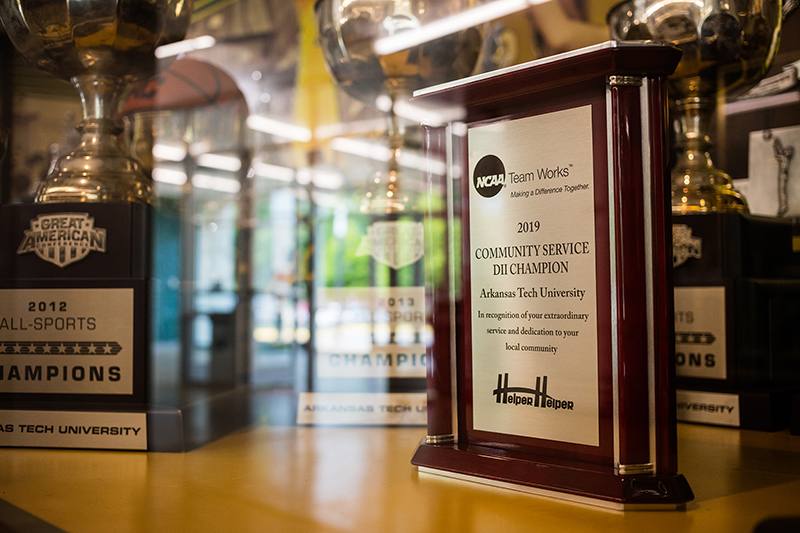 Walk into Tucker Coliseum. Stand in front of the trophy case. There, proudly displayed front and center among symbols of athletic championships won, is a testament to the true heart and character of the Wonder Boys and Golden Suns.

At first glance, you might think the trophy is made of wood and metal. You’d be right, but it’s also constructed in part from hours reading to elementary students and stuffing backpacks with non-perishable meals so those same kids have food to eat, just to name a couple of examples.

It’s a trophy that reflects compassion and caring.

Parts of this trophy belong to all 10 intercollegiate athletic teams at Arkansas Tech. Every student-athlete and every coach at ATU during fall 2018 participated in an effort to win the NCAA Division II Helper Helper Team Works community service national championship.

Just like everything the Wonder Boys and Golden Suns do, there was a competitive aspect to this. Arkansas Tech had finished second in the national community service competition each of the previous two years. That was great, and the surrounding area benefited from those thousands of hours donated by ATU student-athletes, but runner-up prizes are not the goal at Arkansas Tech. 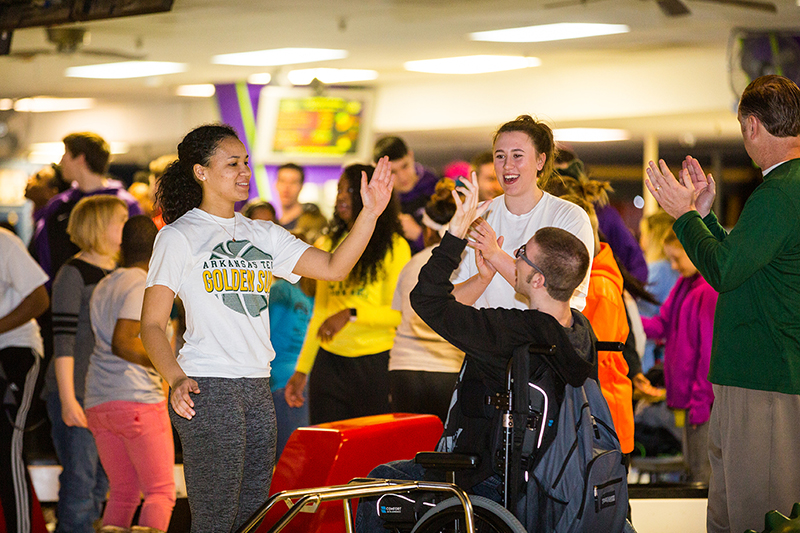 So, when the fall 2018 semester began, the Wonder Boys and the Golden Suns hit the ground running. Three months later, they had logged 3,535 hours of community service.

There are more than 300 NCAA Division II members in the United States and Canada. From September through November 2018, none of them could match ATU’s responsiveness to the needs of its community.

Representatives from every ATU team stood on the Tucker Coliseum floor and received applause from the Tech family during the NCAA community service trophy presentation in February.

Sometimes applause makes people complacent. Sometimes it can spur them to do more.

The ATU volleyball team chose to do more. The Golden Suns were placed in a 64-team bracket to see which one from every level of NCAA—Divisions I, II and III—could perform the most community service during the spring 2019 semester.

When the hours were counted, Arkansas Tech once again stood alone.

The Golden Suns volleyball team completed 555 hours of volunteer service to win the bracket challenge and further validate this truth: when it comes to helping communities flourish, no institution of higher education in North America is more committed than ATU.

“When we are in an elementary school and working with younger kids, we get to be role models because they think we are superstars,” said Hunter Eshnaur, a four-year letter winner with the ATU volleyball program from 2015-18. “When you come to Arkansas Tech to play sports, you aren’t just signing up to play your sport. You have many responsibilities, and one of them is community service because service plays a huge role in the Arkansas Tech athletics program.”