A 2nd Chance at Leadership

A 2nd Chance at Leadership 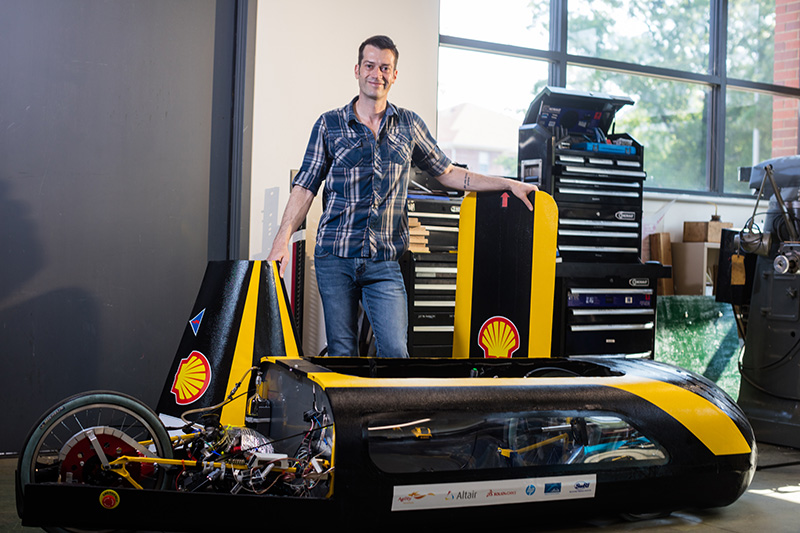 After growing up in Russellville and graduating from ATU in 2003 with a Bachelor of Arts in Spanish, Lea served seven years on active duty as an officer in the U.S. Army. His service included deployments to Iraq and Afghanistan.

Lea returned stateside and lived on a 36-foot, 1969 Cheoy Lee sailboat along the Florida coast for five years. He worked for aircraft parts company Aeromomentum, and along the way, he confirmed that mechanical engineering was his true calling.

“We came back [to Arkansas] to visit family, and I just drove down to Tech and enrolled,” said Lea.

“My first mistake I had made in college the first time was not getting involved in student clubs,” said Lea. “I was an outdoorsman, so I was skipping class to go up to Sam’s Throne to climb rock. Coming back, I knew I had to get involved in a student organization.”

Lea found the perfect fit with the ATU Society of Automotive Engineers (SAE).

“I was scared coming back to college,” said Lea. “I was a freshman, and at the time, I was 36. I didn’t know if I was going to be able to do Calculus. You have to get involved. You don’t realize how much free time you really have. You get older, and you realize ‘I just want to burn up time in the shop.’ The guys who do choose to work in the organizations—and it is work—are the ones who are most satisfied with their time in college.” 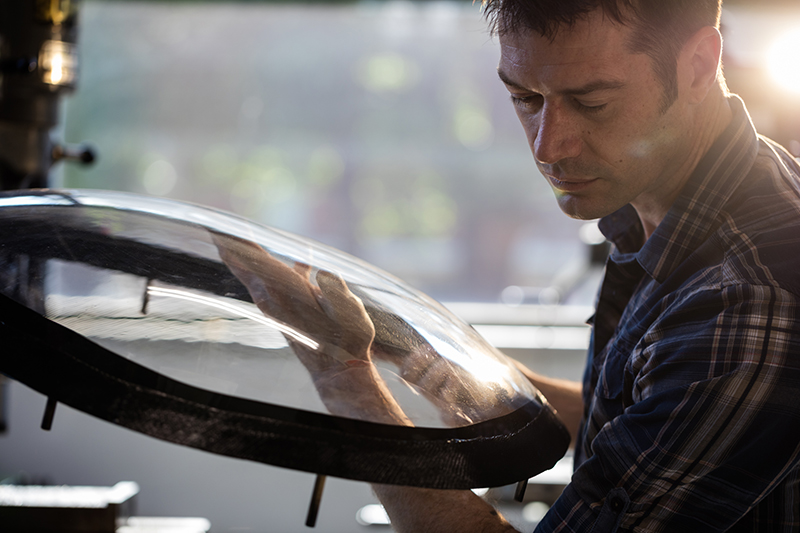 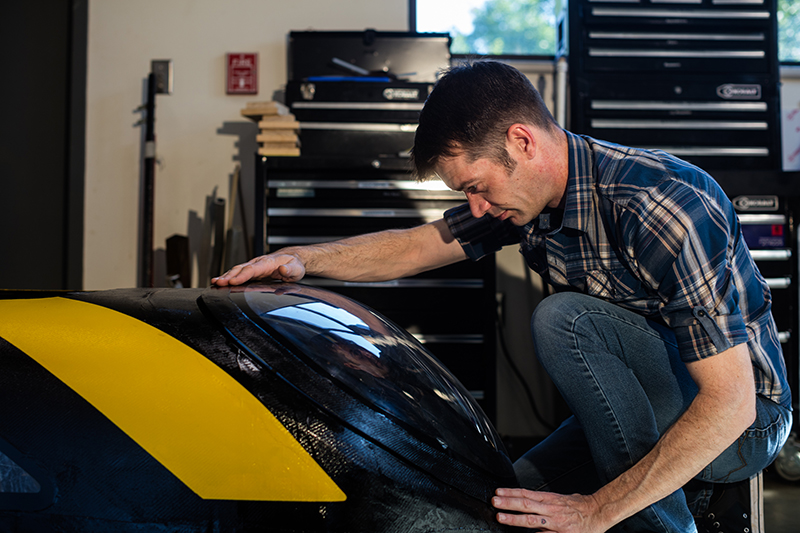 During spring 2019, Lea was part of an ATU SAE team that achieved 993 miles per gallon in the Shell Eco-marathon Americas challenge at Sonoma, Calif. It was a 368 percent increase in fuel efficiency as compared to ATU's 2018 entry into the competition.

“We were rushing pretty hard to get all the goals and deadlines met,” said Justin Duke, team leader and a spring 2019 ATU graduate from Beebe, while reflecting on the weeks leading up to the event. “We were feeling fairly confident, but at the same time, we weren’t sure because that track [Sonoma Raceway] is different than the one we test on here. We didn’t really know what to expect. I was hoping for 500 [miles per gallon]. We first started out on the practice runs hitting 400, and then we bumped up to 600 and 600 again…then 850 and going up to 993 as our best run. Every little adjustment we were making was increasing it pretty quickly.”

Lea worked under the direction of Duke and with five of their fellow ATU engineering students—Michael Anderson of Casa, Brayden Butler of Hot Springs, Stephen Kajdan of Clarksville, Justin Stroud of Hector and Jay Wallace of Omaha, Texas—to achieve their goals. Together.

“I’m forcing myself to do these sorts of things,” said Lea. “I’ve realized it’s a better way to live life. In high school, I was interviewed because I was on the swim team. They asked me what I liked about swimming, and I said that I liked it was an individual sport. So this has been with me always…mountain biking, rock climbing…it’s all competition within yourself. The Army instilled a lot more teamwork in me. I had to rely on my team to get the projects done, and then coming back to college, I applied what I learned from my NCOs [Non-Commissioned Officers] in the Army. They are the ones who develop you as a young officer, and they are the old crusty guys who know what to do.”

“A lot of people wanted me to step into a leadership position with SAE, and I refused to,” said Lea. “I treated myself like an NCO. These kids were the ones who needed to learn how to be leaders. I know how to be a leader. They don’t know how to run an organization. You see organizations rise and fall. They rely on a consistent flow of dedicated students who are really excited about the task at hand. It feels good to be involved in those types of activities.” 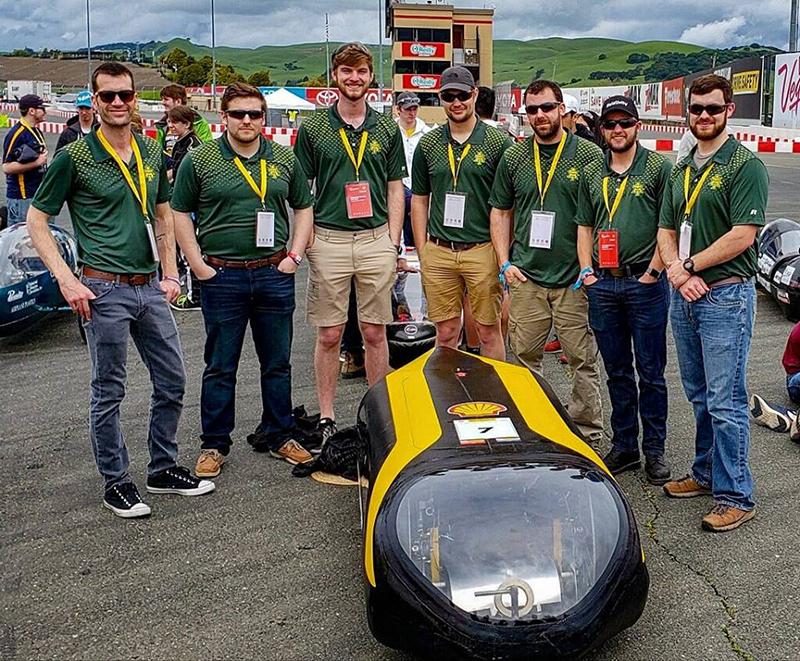 Arkansas Tech finished third among teams from the U.S. and seventh overall in the internal combustion engine division the 2019 Shell Eco-marathon Americas challenge.

The ATU SAE team achieved all of that on a budget that was tens of thousands of dollars less than the investment made by most of the other top competitors.

Lea played a key role in the cost efficiency that made the fuel efficiency possible.

Calling upon his days renovating his sailboat, Lea was able to fashion the body of ATU's Shell Eco-marathon car from fiberglass. As a result, the body was constructed at one-seventh the cost of the pure carbon fiber bodies that most Shell Eco-marathon teams use.

“We have access to certain resources, and that’s one thing I always like about coming back to Arkansas,” said Lea. “We have access to a lot of small industry...small machine shops you can talk to like a friend. It allows us to have ingenuity with our money. If there was a part to be made, we had a meeting, and it happened in a day or so. The next day we were executing whatever the new plan was. That was the key, and honestly, that was all Justin [Duke]. He was driving it every day and wanting to know what is happening today.”

As he looks forward to his second senior year at ATU, Lea will be the team leader for the Shell Eco-marathon project. He believes a combination of increased engine compression, fuel injection and lightening the car can give ATU a chance to approach 1,500 miles per gallon, and a possible trip to the world championships, in 2020.

“Our senior project is specifically the engine drivetrain,” said Lea. “I think what we really succeeded in last year was building a lightweight car that is well-aligned. We have an excellent chassis, and our engine system obviously wasn’t bad, but I think we’re pretty much at the physical limitation of that engine system when you look at anyone who is beating us. Building a new engine means we need machine help and money. I know how to build this engine, and I know we can make it work, but it will take $2,000 from start to finish. If we can get that, we’ll absolutely have a winning engine. You build a great engine, and you can build your program around it.”

Any individuals or companies interested in assisting the ATU SAE Shell Eco-marathon team during the 2019-20 academic year are encouraged to call the ATU Division of Advancement at (479) 968-0400.